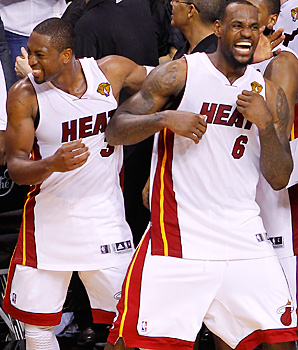 In a rather anti-climactic fashion, the Heat dominated the Thunder last night to win the 2012 NBA Championship series 4-1. Lebron (and Shane Battier, Chris Bosh, Juwan Howard, and …. Eddy Curry) finally have their first championship rings. While Lebron James led his team to the championship in a triple-double fashion, Mike Miller reincarnated the phrase “Miller Time” and was a ridiculous 7-8 from three-point land last night. Russell Westbrook went back to his usual ways and shot 4-20 from the field. Kevin Durant scored 32 points but was plagued by 7 turnovers, but give him credit for continuing to play hard even when the Thunder were down 20 and the outlook was bleak. Overall, this was a team effort by the Heat as all of their starters scored in double digits. Though I’m happy to see Lebron get his ring, I am sad that this very entertaining finals series and tumultuous lockout season is over. Now onto the offseason free agent moves…