Probably the only clip from Game 1 that Knicks fans were smiling/laughing about.

Man, that was ugly. For some reason or other, the Knicks decided to ignore my previous article and not adhere to any of my keys to victory. How do they expect to win by not following my expert opinion?!

1)      The Heat played Melo perfectly, either by pushing him so far out of the paint that by the time he caught the ball, he was all the way near the 3 point line, or by fronting him so well that by the time the lob pass got to his hands, the help defender was already there for the double team. Goodness, Miami’s defense is fast. When Melo did get the ball though, he was ice cold, missing shots that he would normally make. I’m not too concerned about this as he followed a 5-18 shooting performance in Game 1 of last year’s playoffs against the Celtics with a 42 point performance in Game 2. My suggestion for tonight’s Game 2 would be off the ball screens to free up Melo and get him the ball easier and in more favorable areas so that he won’t have to expend so much energy just to get position against a stronger, faster Miami defense.  The bright spot of his performance was he knew his offense wasn’t going for him so he worked hard in other aspects of the game (ie. 10 rebs) to help his struggling team.

2)      Stoudemire and Chandler combined for 8 rebounds, which is less than Melo’s 10 rebounds. Furthermore, Stat and Chandler were a combined 2-10 from the field. Chandler had seven turnovers alone. Jared Jeffries is battling knee soreness and was limited to 8 minutes. It’s safe to say that the Knicks bigs failed this point miserably. Granted, Chandler is battling the flu so let’s hope that this game is just an anomaly. What’s Stoudemire’s excuse though?

3)      Novak only took 2 shots… and made both! Someone tell me why Woodson doesn’t run more plays for him when he’s on the court.

4)      JR Smith was one of the few players who was consistently aggressive on offense (not surprised) but at the same time, what is up with his boneheaded fouls? It’s almost as if he waits for the guy he’s defending to shoot just so that he can foul him in the act of shooting and give him the possibility of the And-1. Also, his dribbling should be limited to 1v1 play and he should not be allowed to handle the ball in traffic.

5)      Shumpert’s injury is a critical blow to the Knicks defense. With their defensive anchor, Tyson Chandler, clearly not himself, the Knicks defense gave up 100 points when their 11th– best rated defense averaged 94.7 points in the regular season. Of course, some of this had to do with the foul disparity (20 first half fouls on the Knicks as opposed to 8 on the Heat) and the refs getting into the Knicks players’ heads but the Knicks need to develop some mental toughness and keep a playoff composure. My advice for the Knicks tonight is to try to keep Lebron out of the paint as much as possible and make him beat you through jump shots. Frustrating him through hard fouls could also help, since he clearly loves drawing flops, I mean fouls.

6)      Probably the biggest failure of all my key points, the Knicks turned the ball over 27 times, allowing for 38 Heat points off of turnovers. This is the most turnovers committed by the Knicks out of any game in the 2011-2012 season. The closest they got was 24 turnovers in a January loss to the Bucks. In the 2nd quarter alone, the Knicks turned the ball over 12 times. If they continue to let Miami’s defense phase them and don’t take care of the ball, then I think it might be time to bring out the brooms.

Tonight’s game has historic implications as the Knicks’ current 11-game playoff losing streak is one shy of the NBA record for consecutive playoff losses, set by the Memphis Grizzlies from 2004-06. Sadly, the last time the Knicks won a playoff game was exactly 11 years ago Sunday, against the Toronto Raptors. With Baron Davis listed as day-to-day after re-tweaking his back, Jared Jeffries dealing with knee soreness, Shumpert out  until next season, and Tyson Chandler and Toney Douglass battling illnesses, the situation does look bleak for the Knicks.  However, does anyone remember this guy?

LeBron James and Mario Chalmers combined for seven steals, leading the Heat to a Game 1 blowout win over the Knicks.  One of David’s keys was limiting turnovers, but the Knicks committed a total of 24 yesterday.  A flu-weakened Tyson Chandler turned the ball over seven times and committed a flagrant foul (which looked like just a hard foul to me).  The Game Finder identified only eight games where a player scored 0 points and committed 7 turnovers.  With Iman Shumpertjoining Jeremy Lin on the sideline, the Knicks need Chandler to play better to keep this series interesting.

NBA PLAYOFFS ROUND 1 – KNICKS KEYS TO VICTORY VS HEAT 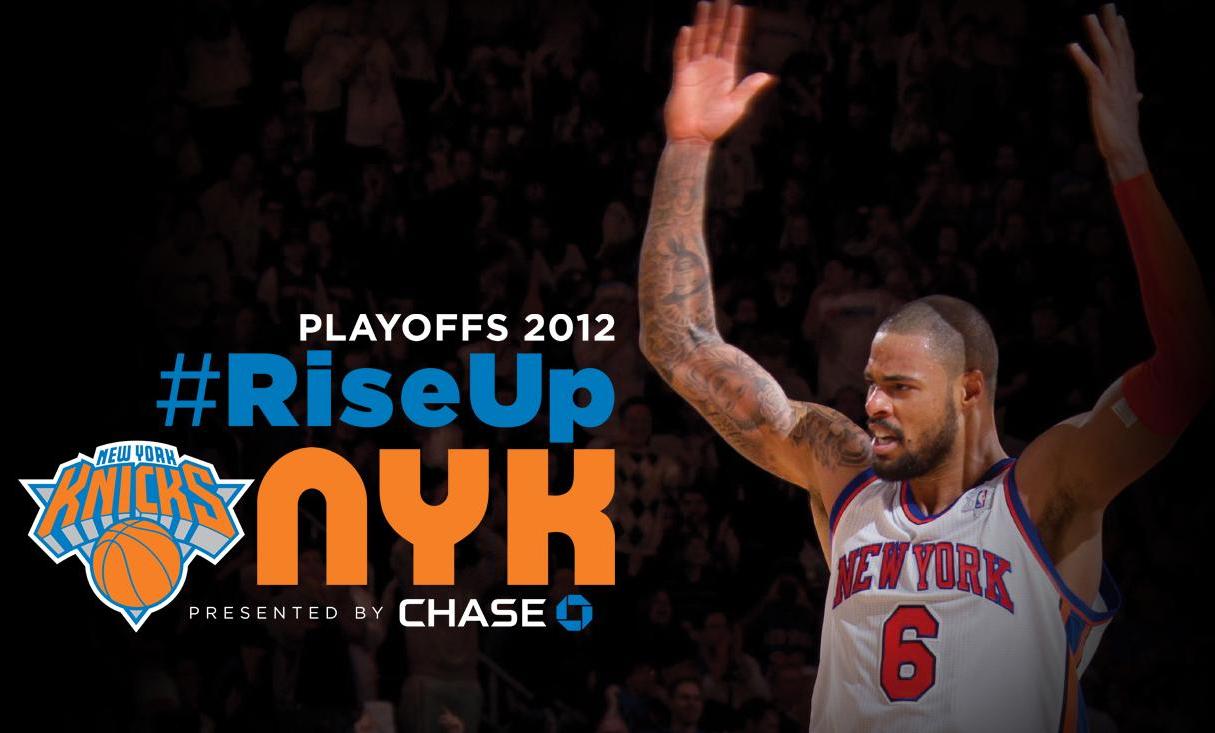 It’s set. Game 1 – Knicks @ Heat. Saturday 4/28/12. 3:30pm.
I will be the first to admit that beating the Heat and advancing into the 2nd round of the playoffs is a long shot. They have lost all 3 regular season matchups against the Heat by an average of 10 points. Evan Turner of the Sixers even went on record saying that the Sixers are “dodging the tougher team”by facing the #1 seeded Bulls in the first round. However, I don’t think advancing to the 2nd round is an impossible feat for the Knicks, especially since the Heat have not faced a complete Knicks roster since Melo decided to undergo that radical transformation back to his old self back at the end of March. In fact, if the Knicks are able to execute all the below keys to victory, I think it’s very do-able. So without further ado…

1)      Melo must continue being Melo – Without a doubt, teams are going to be onto Melo’s shenanigans in the playoffs and will probably throw many double teams his way. However, if he stays in control and maintains his court vision (ie. 10 assists against Boston back on 4/17/12) and feeds the Knicks bigs for high percentage buckets against a deficient Miami front court, then the Knicks can be deadly. Because of the way Melo has been playing as of late, many comparisons have been made between this year’s Knicks and last year’s championship Mavericks team. Let’s think about it: Melo = Dirk, Chandler = Chandler (duh), JR Smith = a streakier version of Jason Terry, Baron Davis = a handicapped Jason Kidd, Shumpert = Marion with an offense. Also, this comparison isn’t even including Novak and Amare! Comforting isn’t it?

2)      Knicks bigs need to exploit the Heat’s weakness in bigs – Rebounding, points in the paint, blocks, you name it. The Knicks need to capitalize against a team who has soft-body Chris Bosh, offensively deficient Joel Anthony, Eddy Curry (self-explanatory), and Dexter Pittman (who?) as their centers. Over the season, the Heat have averaged +1.7 rebounds per game (RPG) differential, and in losses they average a -5.4 RPG differential. Thus, Tyson Chandler cannot be the only one grabbing rebounds for the Knicks. Either Amare or Melo (or both) must chip in. Ideally, at least 25 rebounds among the 3 of them.

3)      Novak has to be involved in the offense and get good looks – Woodson has to draw up new plays to free him up and get him open shots, especially when teams are stuck on him like glue all game. There’s been games where Novak had less than 5 shot attempts and that’s just unacceptable for the most consistent 3 point shooter in the league. Maybe Woodson should consider giving him double screens if a simple screen won’t work. Novak’s performance in the playoffs can help enormously to spread the floor for the Knicks, which is something they need if Melo, Stat, or Chandler are on the floor and the Knicks plan on completing the aforementioned key #2. Of course, if Novak’s defense proves to be a liability to the Knicks in this series then it will be tough to complete this task.

4)      We all know JR Smith is streaky, but he must contain it and be smart about it – He must go off when needed and if he’s off, he must focus on his defense and not continue to take bad shots and throw off the Knicks’ offensive flow. At the risk of some blatant finger pointing, he took some poor shots in crunch time against the Heat in their last outing. But then again, when he does make those poor shot selections in crunch time despite missing every other shot prior, this would be a moot point right?

5)      Defensive intensity must be consistent all series, especially on the help side – The Knicks need to deny the lane and draw charges and if the help is late, they need to foul hard to prevent the And-1 and make Lebron/Wade earn their points at the line. Jared Jeffries expecting to come back for Game 1 should be a big help in this area. Also, Shumpert’s 2 consecutive strips off of Dwyane Wade in the back court during the last matchup is promising.

6)      Limit turnovers – This seems like an obvious point but one team you don’t want to turn the ball over against is the Miami Heat. The Heat thrive on these mistakes by using their athleticism and superior finishing abilities to get easy buckets in the open court. This past season, the Heat averaged 14.8 turnovers per game (TOPG) while forcing 16.9 TOPG. In their 17 losses during the regular season, the Heat averaged 15.2 TOPG while only forcing 14.64 TOPG. This translates to a swing of 2.7 TOPG with a potential impact of 6-9 points per game. Thus, the Knicks need to slow the pace of game down to a half court game against the Heat. Smart ball movement on offense can exploit the Heat’s tendencies to gamble the passing lanes on defense.

We can all tell our grandchildren that we saw the worst team in NBA history:  the 2012 Charlotte Bobcats.  I hope they don’t win the lottery.  They don’t deserve Anthony Davis.

Sports Illustrated has an article on Avery Bradley‘s improving offensive game.  Bradley is certainly shooting the ball better (0.500/0.438/0.800) this year, but his assist (2.3 ap36m) and rebound (3.1 rp36m) totals are still relatively low.  The most recent RAPM ratings have his offensive ratings at -2.3, while his defensive ratings are a solid +1.7.  Bradley has certainly improved a lot this year, but is he still a liability of the offensive end?

The Bobcats allowed two players from the lowly Wizards team to make our best perfomers list.  Do they realize they don’t get more ping pong balls if they set the record for fewest wins?