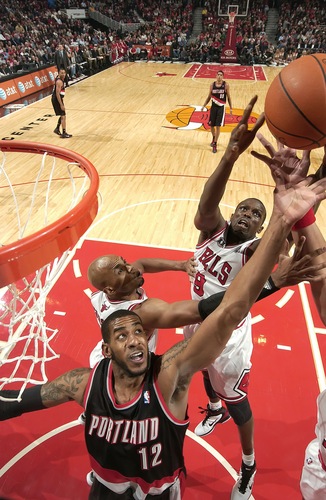 Our NBA Chemistry paper introduces the Skills Plus Minus framework which can generate mutually beneficial trades.  One such trade would be a blockbuster exchange of two 26-yr old first time All-Stars:  Portland’s LaMarcus Aldridge (6’11″, 22-8-3) and Chicago’s Luol Deng (6’8″ 16-7-3).  Why does the framework think that this trade would benefit both teams?  The simple answer is that Chicago has a surplus of defense, while Portland has a surplus of offense.

Chicago needs more inside scoring to complement Derrick Rose, and is already the best defensive team in the league.  They can afford to part with Deng, who is the league’s best defender in terms of defensive RAPM.  Portland, on the other hand, needs more defense, and has plenty of offensive-minded players (Crawford, Batum, andFelton) to replace Aldridge’s production.  Would a frontcourt of Aldridge–Noah–Boozer be too big?  Possibly, but the Bulls could arrange their substitution patterns such that two out of those three would always be on the court at any given time, withKorver or Brewer sliding into the small forward slot.